The temperament, behaviour and nature of the breed have evolved considerably in the long breeding process until registration in the FCI, and many character features are adjusting to this day. Individuals with positive characteristics for humans have been selected for breeding – easily manageable and working ones, while aggressive, irritating, too much shy ones were excluded from breeding, even at the expense of exterior quality. Later, however, breeders, in addition to their nature and character, began to take care of the setting of the exterior with the aim of preserving the wolf’s appearance of the breed.
For these reasons, the Czechoslovakian wolfdog became, in time, a tireless and specifically devoted associate of a human being with steady characteristics, along with demanding conditions in the owners’ attitude. Good and early socialization leaves an important trace in wolfdog´s development of its character, that is- social life and vivid experiences, relationship with the owner, psychological burden, social contacts with strangers and other dogs.
An individual feature of a Czechoslovakian wolfdog is that he/she is easier in gaining or fixing one of the negative features, such as stubbornness, spoiling, laziness, or fear. Most of these features are fixed unconsciously and they are difficult to be removed. The nature of this breed can be ruined a bit easier than with other breeds. It’s a dog of one master and he may have troubles to be got away from him/her.
A common wolfish character element of a Czechoslovakian wolfdog is natural shyness.
In this breed, it is of utmost importance to pay attention to socialization from the earliest age of puppies, because the shyness is partially tolerated in the breed but undesirable because it may be associated with fear aggression in worse cases. For Czechoslovakian wolfdog, it is important to get in contact with as many people as possible. The puppy accepts people diffidently, but quickly gets used to it. 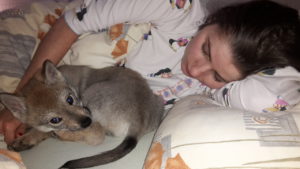 An indispensable part of socializing on people is contact with both sexes, different age categories, and especially with children, when the dog must understand that the child is not a toy or even a playmaker. The later the socialization of the Czechoslovakian wolfdog begins, the more hard the dog is to be convinced that the stranger will not hurt him/her. With a proper and frequent socialization, the Czechoslovakian wolfdog becomes a devoted friend, dependent on his wolfpack, wise, playful and cheerful companion, without any problematic contact with the strangers.
The Czechoslovakian wolfdog is temperamental, active, scholarly and fast-reacting, courageous, persistent and weatherproof, dominant, stubborn, with strong hunting instincts, at the same time can be shy to the people and is strongly linked to the one owner.

Who is a Czechoslovakian wolfdog suitable for? 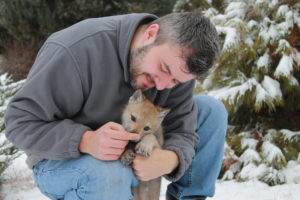 Czechoslovakian wolfdog is a very adaptable breed. Their usability is varied and the choice of activities depends mainly on the owner. However, we can not deny that it is sometimes necessary to adapt our way of life and our activities with the arrival of the Czechoslovakian wolfdog to the family. This breed always requires the attention of its master, it can hardly bear separation from the owner, and the feeling of missing the owner often manifests with howling, digging, chewing the objects, or, on the contrary, with the offended expression after the master’s return.
The dog is very active, difficult to get tired, always with an inexhaustible source of energy. Therefore, it is suitable for active owners interested in hiking, running, cycling, dogtrekking, walking, but also defense or obedience training; all of these are activities suitable for this breed. The greatest sense of the life of a Czechoslovakian wolfdog is to be with his master. There are frequent cases of wolfdogs’ fugitives when they try to find their master and bring him/her home.
Unlike some other breeds, they do not run away from the master for a new adventure, but they run away after their master. For this reason, we must think about the already mentioned good dog security. Breeders often ask the question of the suitability of keeping the dog in the apartment. From the dog´s point of view, there is nothing better to do for the Czechoslovakian wolfdog, because he/she has almost constant contact with the owner and other family members in the apartment, while in the stall it spends most of the day alone and sad.
During the walk, it is advisable to have the dog always under control because of his/her strong hunting instinct. Anyone who has not mastered the come command, should have the dog on the leash. Wolfdog on a walk is curious, tracing, exploring the new environment and has the constant need to conquer new territories. Czechoslovakian wolfdog is also suitable for beginners, but it is necessary to be aware of the specifics of this breed. It is necessary to have support of the whole family. If you love your family comfort, you do not like to adapt and you do not have the time and patience, there are many more suitable breeds for you. Every dog ​​will change your life, but the Czechoslovakian wolfdog will turn it upside down.

The pedigree is not just a “piece of paper”

Everything begins with the pedigree. Where would be today´s breeds, if their breeding from the start was not properly registered? Where would the breed of Czechoslovakian wolfdog be if Mr. Hartl and Mr. Rosík did not mark the dogs and the connections would be run randomly, only according to which wolfdog is closest to the hand? How would they secure that siblings do not combine?
This principle has to apply also today, and without it the breed itself would be extinct. In the case of a Czechoslovakian wolfdog, when Slovakia is the guarantor and patron of the breed, this applies twofold. Breeding without evidence of several generations backwards has no direction, can not prevent close family breeding, can not eliminate health problems and unusual differences of individuals. It is also not possible to guarantee the crossing of another breed in generations back, which is a very common phenomenon. We can often see it in advertisement of dogs without a pedigree. But the most important question is why the dog does not have a pedigree, why his parents do not have it or why they were not approved for breeding. There is a very high probability that the dog did not pass the test of the character at the bonitation. It could have been disproportionately aggressive or extremely fearful.
It is not in the interest of the breed to use such extreme character further in the breeding. By purchasing a puppy without a pedigree we risk these genes at the puppies, they can be even at both parents. Who wants to own a Czechoslovakian wolfdog at home, he/she must buy it with a pedigree. The new owner will know who mother and father of the puppy are, also their health, their genetic predisposition, the owner will be assured that both have passed the test of character and that they have healthy joints. Who only wants a nice dog, he/she can buy a dog without a pedigree, but he/she can never claim to have a Czechoslovakian wolfdog.