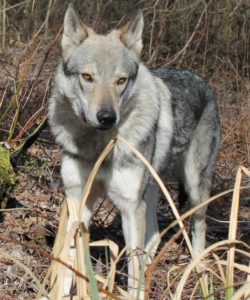 No special conditions are required to house a Czechoslovakian wolfdog. The Czechoslovakian wolfdog lives all year round in the outdoor environment – in the stall, the outpost, but also in the apartment. However, they must have regular contact with the owner and other family members. One of the few disadvantages of keeping the Czechoslovakian wolfdog in the apartment is moulting and some demolition tendencies in the absence of the owner. Speaking of stalls and outposts, it is good to have these places secured by a higher fence, due to possible escape.
The coat of this breed is problemless. We do not cut the Czechoslovakian wolfdog, except for exhibitions or rolling up in the mud, no bathing is necessary because our national breed has a self-cleaning coat. The hair has a natural scent, it does not smell even when the dog is wet.
The Czechoslovakian wolfdog is suitable once a month to brush to remove moulting fur, but combing for the dog is also a pleasant massage. Greater emphasis on coat care is put at the time of getting rid of the undercoat after winter, but the coat can also be changed twice a year. Moulting of the undercoat is often radical, in a short time, not only the undercoat, but also the cover coat is replaced. During this time it is advisable to comb every day to avoid unnecessary scratching.
During the summer, the dog has a small coat with no undercoat, only the neck has longer hair, but not very rich. A dry, hard or damaged coat may be a reaction to poor or inappropriate nutrition.

The Czechoslovakian wolfdog does not belong to the most frequent vet patients. One of the main goals of breeding this breed was to create a healthy and resistant breed. However, it can not be said that, from time to time, the heritage of the German shepherd does not appear in addition to the heritage of the wolf, and therefore no health complications can be excluded. A huge role in the health so called “inbreeding depression” takes place, which occurs in all pure-bred breeds, and is associated with limited genetic variability in the breed – in other words, the limited numbers of genes and, therefore, even closer or more distant relative breeding. Inbreeding depression is manifested especially by immune disorders, of which there are other diseases and viability of offspring but also fertility disorders. However, it is questionable which health problems are related to inbreeding depression, and which health problems are related to the external influences such as changes in nutritional trends, as well as overall changes in the environment. However, it is important to emphasize that the Czechoslovakian wolfdog still belongs among healthier breeds, not overbred. They do not have breathing problems, problems with spinal cords, patellas, or motion apparatus. There is a heart defect, which is also very rare.

Wolfdog lives on average 12-16 years of age, and even at more advanced age can be still very vital. Allergies are exceptional in this breed. Females are generally good and caring mothers with strong maternal instincts. They usually heat only once a year, but this period is extended. Giving a birth is also problemless. Breeders are committed to using all available testing methods to continually improve the overall health of the breed. It is desirable that breeding couples are tested not only for dysplasia, but also for degenerative myelopathy and dwarfism (which are required for approving for breeding in Slovakia), which also belong to the heritage of German Shepherds. The carrier of these diseases is not affected by them, and does not show any illness at all. Therefore, it is not desirable to exclude carriers from the breeding, but to correctly combine breeding couples so that the disease does not manifest at the puppies by combination of two carriers.